View cart “Preschool Sensory Scan for Educators (SENSE): Forms Packet” has been added to your cart. 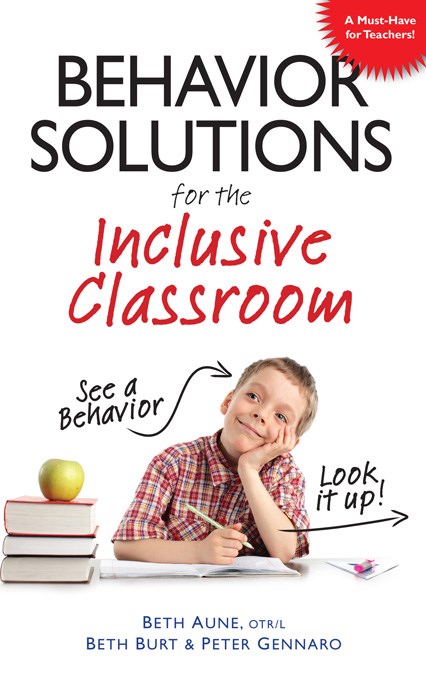 Behavior Solutions for the Inclusive Classroom

WHY won’t he stay in his seat?
WHY does she flap her hands?
And WHAT should I do??

As inclusion becomes the norm in general education, teachers are faced with behaviors they have never seen before. Special needs educators may recognize the telltale symptom of a sensory need or a textbook-case of an avoidance behavior, but this is all new territory for the general-ed crowd!

Written by Director of Special Education Peter Gennaro, occupational therapist Beth Aune, and special needs mom and advocate Beth Burt, this book illuminates possible causes of those mysterious behaviors, and more importantly, provides solutions! Teachers can quickly look up an in-the-moment solution and learn about what the child is communicating, and why.

The authors collaboratively address problem behaviors such as:

Teachers, it is possible to accommodate learning differences and sustain a positive learning environment for ALL students. This book is a must-have for every inclusive classroom!

Beth Aune, OTR/L currently has a private practice as a pediatric occupational therapist in the Coachella Valley area. She and her dedicated staff provide intervention for children with autism spectrum disorder, developmental disabilities, and other diagnoses in a variety of environments: early intervention in the home, for general and special education students in the school setting, and in the clinical setting. Beth has developed and presented numerous workshops and trainings for parents and educators that focus on the care and treatment of children with disabilities. She is passionate about her profession as an occupational therapist and considers it a calling. She lives in Palm Desert with her three children.Beth Burt currently resides in Southern California with her husband, their two sons, two cats, and a dog. Because of her experience with her own children, one with an autism spectrum disorder (ASD) and the other with a learning disability, she became an advocate. She has over thirteen years of experience collaborating and advocating on the behalf of students with ASD and other disorders. She has been actively involved in numerous task forces and committees related to children, disabilities, and education. She has presented numerous times in Southern California to colleges, conferences, parent groups, and businesses. She is currently President of the Inland Empire Autism Society and is a board member of the Autism Society California and Visions R Us, a nonprofit organization that assists young adults with special needs in making the transition from high school to desired employment.Peter Gennaro is currently the Director of Special Education for the Alvord Unified School District in Southern California. He served as Special Education Coordinator and as Program/Inclusion Specialist prior this. As a teacher, he taught classes for students with emotional disturbances and has taught direct service special education classes consisting of students with varying disabilities. In his current position he continues to work closely with teachers, service providers, and families to develop and implement successful student programs.

Listen to Your Food

Benefits of Yoga for Children with Sensory Challenges

Explore our wonderful catalog of products online, or ask for one by mail!

Because data have shown that one in six children have sensory issues, Sensory World is most interested in exploring and creating distributors of our products in the USA and around the world.

If you are interested in becoming a distributor and want to sell our products written in English at a discount, please contact [email protected].

If you are interested in translating or publishing any of our books in a language other than English, please contact [email protected].

Fun Fact for the Week

You know them: they can’t get their coats on straight, are easily distracted, impulsive, over- or under-sensitive to sounds, lights, textures, etc. With up to 20% of the students in any given classroom affected by Sensory Integration Disorder, Answers to Questions Teachers Ask about Sensory Integration is an invaluable resource for teachers of preschool through high school.